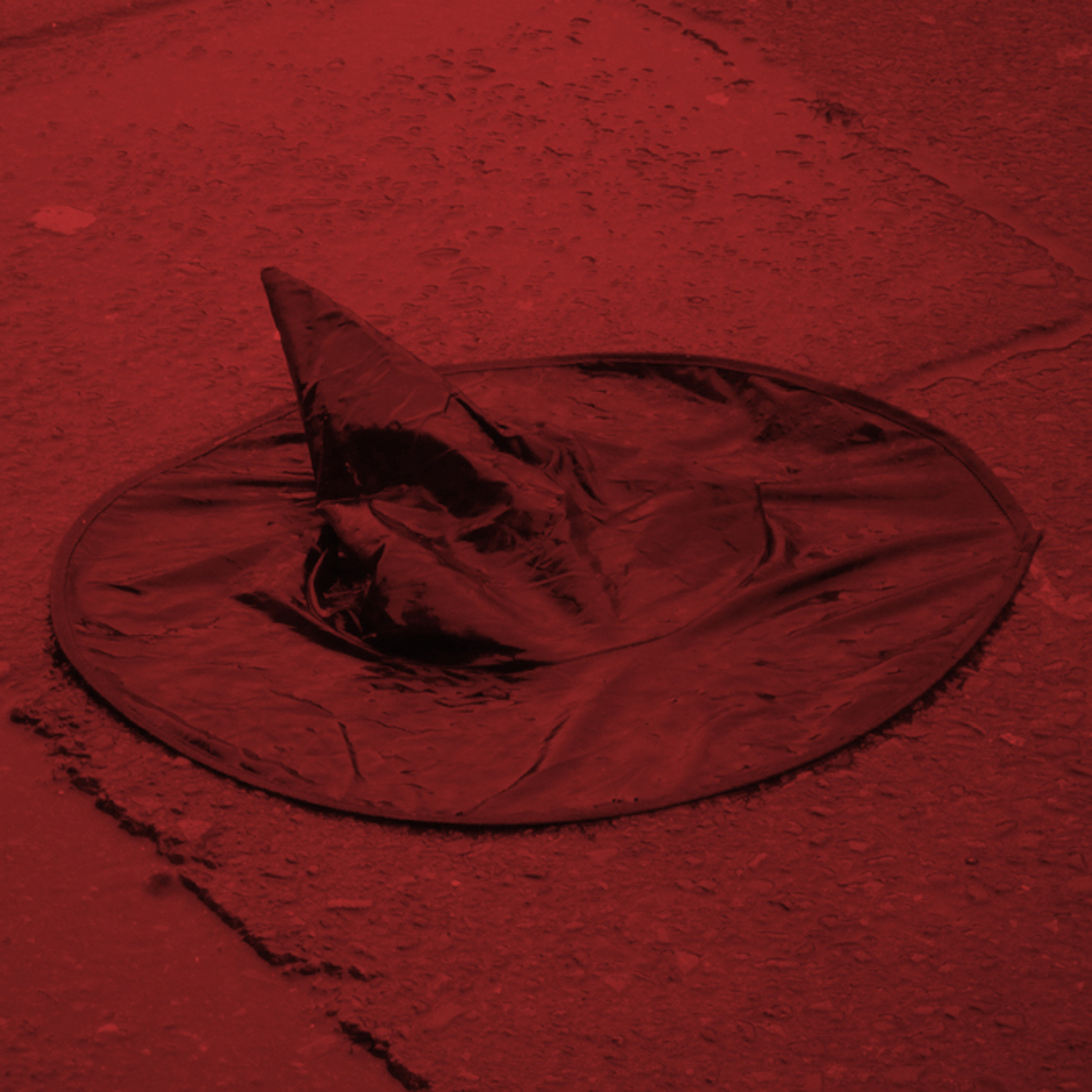 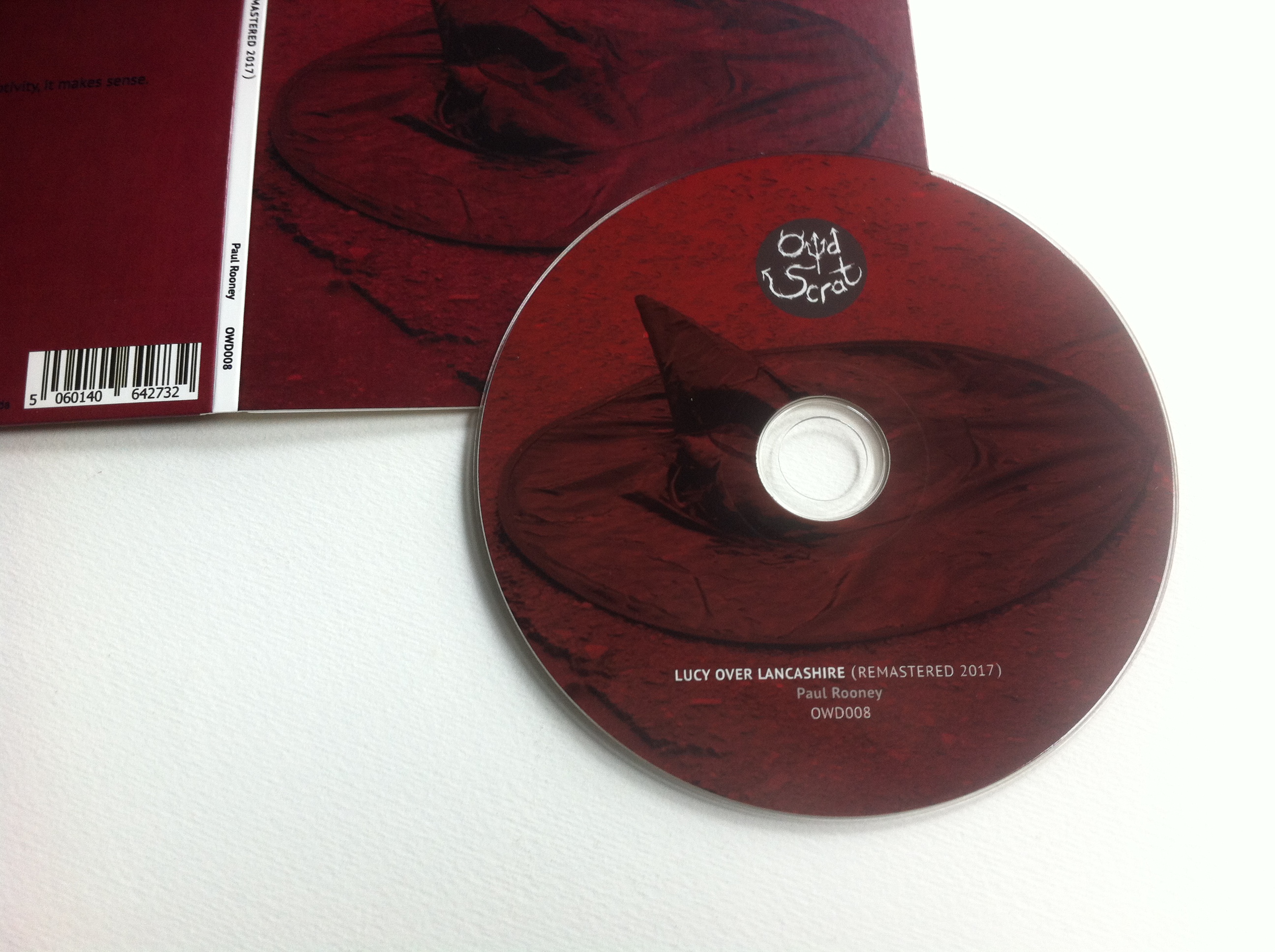 or buy digital file via BANDCAMP

A single 16-minute prophecy in manically inventive post-punk dub, Lucy Over Lancashire by Liverpudlian songsmith-artist Paul Rooney is the vehicle for a ‘spryte of the air’ to expound on the English county of Lancashire’s role in the plans of Satan, plans which involve (amongst other things) the Pendle Witches, singer Mick Hucknall, the bile-filled late-night phone in shows of Allan Beswick, and the Radio Lancashire programme On the Wire (whose longstanding commitment to dub reggae provided one of the inspirations for the work).

The red vinyl 12” of Lucy Over Lancashire was originally premiered by On the Wire in 2006 and released on SueMi Records, Berlin, in 2007. Following it’s steady acquisition of a certain cult notoriety we at Owd Scrat Records released the track as a download and limited edition CD in 2014 (see reviews and comments below). But to commemorate the tenth anniversary of its original vinyl release (and to celebrate Paul Rooney’s first Owd Scrat album earlier this year) we thought we would also present to you a nicely remastered 2017 CD version of Lucy in a lovely deep red lancing pack sleeve with a cover image by artist Leo Fitzmaurice. Thanks to Samantha Mason.

“Rich in comic irony, the narration is nonetheless as deeply rooted as a folk ballad… [a] thought provoking 16 minute gem.” Julian Cowley (The Wire magazine). Oct. 2014.

“…Owd Scrat… a label that put out Lucy Over Lancashire, which was one of the stand out tracks of the lasts few years”. Roger Hill, PMS (BBC Radio Merseyside). 12/3/2018.

“Paul Rooney’s magnificent 16-minute opus Lucy Over Lancashire… has become something of a cult classic, and would certainly be one of my eight Desert Island Discs choices.” Bryan Biggs (Bido Lito magazine). September 2017.

“The [Festive Fifty] chart has also continued to recognise great bands and tunes so cruelly overlooked by the mainstream: …a top five spot for Paul Rooney’s brilliant, under-recognised Lucy Over Lancashire in 2007 one of many others”. Mark Whitby (Louder Than War website). 15/11/2014.

“Where you learn that Kendal is the dark heart of Babylon, Mick Hucknall chief envoy of Satan, and deep, deep dub bass soaks up evil like nowt else.” Rushscored1 (This Is My Jam blog). 8/6/2014.

“Paul Rooney’s Lucy Over Lancashire, first blogged about here, an ambitious piece of music in which a Boggart Lucy explains at some length the connections between Lancashire and the activities of the Dark One.” John Davies (Walking the M62 blog). 11/10/2007.

“Don’t be scared, even though we in the studio are absolutely petrified after listening to that. Lucy Over Lancashire, that was part 3, by Paul Rooney, we’ve already played parts 1 and 2 on the show. Parts 4, 5 and 6 coming up over the next three shows… Brilliant stuff from Paul Rooney, one of the most talked about tracks that we’ve played on this show…” Huw Stephens (BBC Radio 1FM). 3/5/2007.

“Now a great track called Lucy Over Lancashire by the Liverpool based musician and artist Paul Rooney. This was originally made to be broadcast on Steve Barker’s ‘On the Wire’ Radio Lancashire show. Now the Berlin based SueMi Records (great name that, SueMi) have just released it as a 16 minute track on red 12” vinyl… Thoroughly enjoyable piece…” Robert Sandall, Mark Edwards, ‘Where’s the Skill in That’ (Resonance FM). 16/5/2007.

“I’ve got a record in my hand here which is quite intriguing, it’s called Lucy Over Lancashire by Paul Rooney on SueMi Records… Love it, absolutely love it – great isn’t it? I told you it was a weird one.” Marc Riley, ‘Marc Riley’s Mint’ (BBC 6 Music). 25/3/2007.

“Further to redkah’s original thread, Paul Rooney’s Lucy Over Lancashire debuted on Radio Lancashire over the weekend, and it’s a cracker. Reminds these ears of Backsaturday era Prolapse, but with rather bit more going on. All this and Fall references too!” Anon. (The Fall web forum). 21/11/2006.

“Did anyone else here hear Lucy over Lancashire by Paul Rooney on ‘On the Wire’ last night? It was probably the best song ever in the history of the whole world. Posited the theory that the Devil has a hold over Lancashire and the only way to keep him at bay is through the power of Dub.” tangerinedream (Urban75 web forum). 17/11/2006. 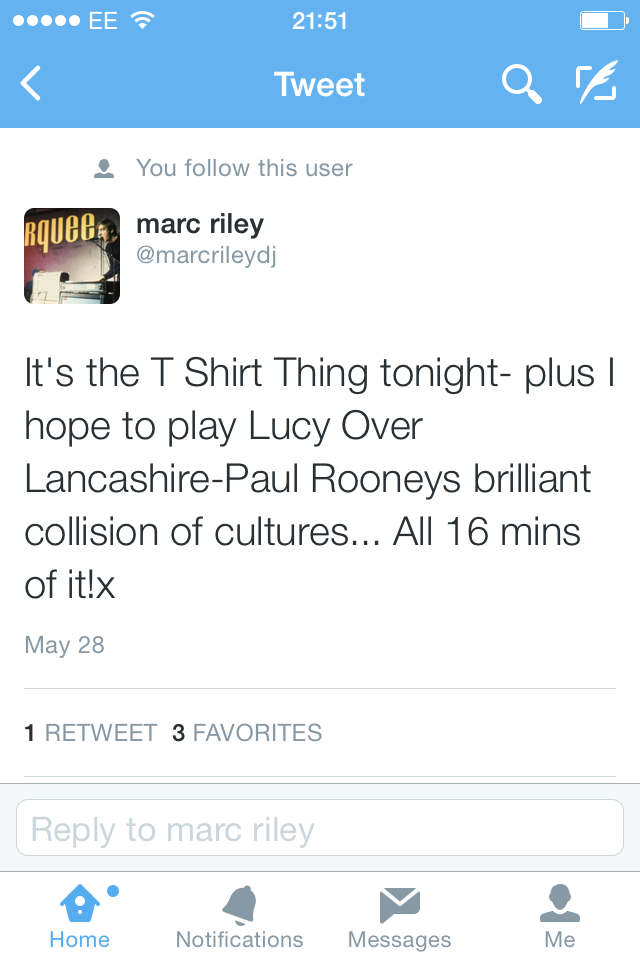 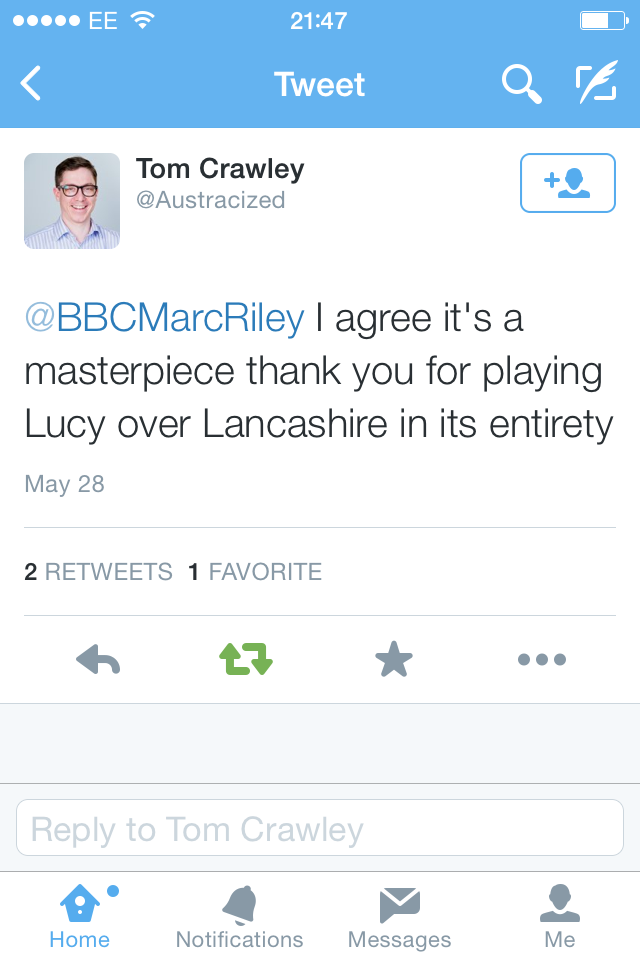 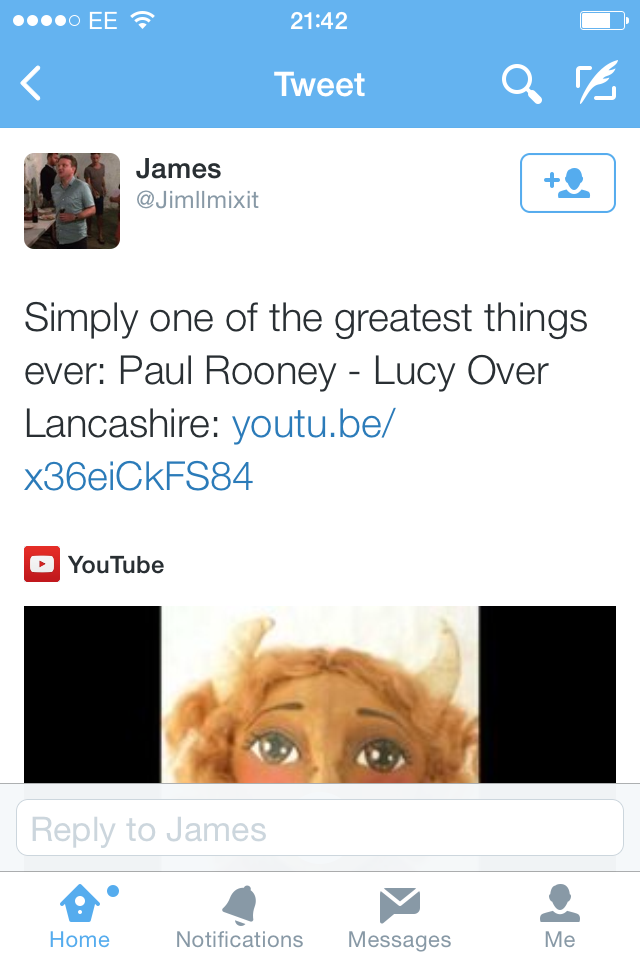 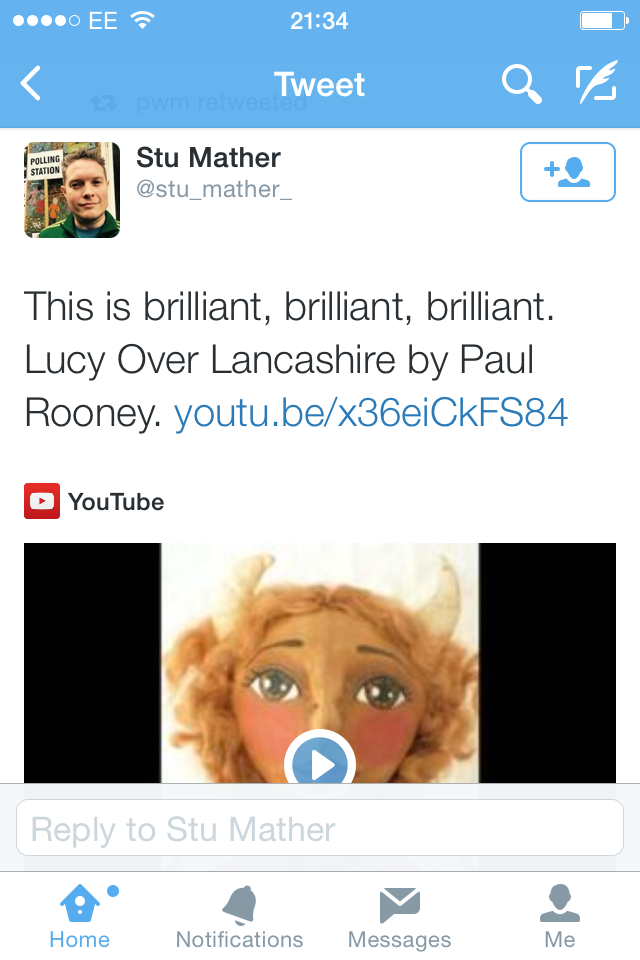 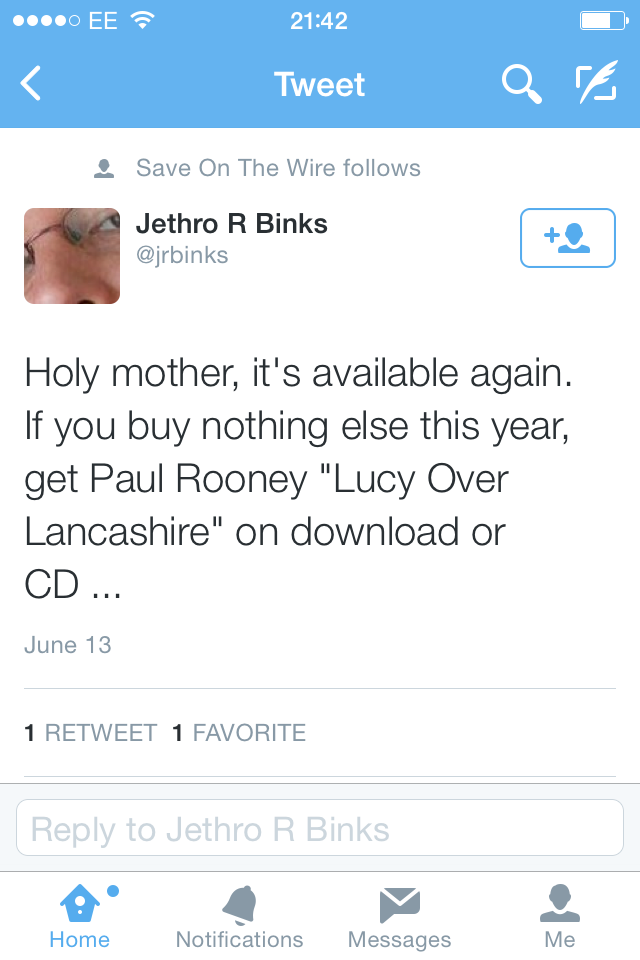