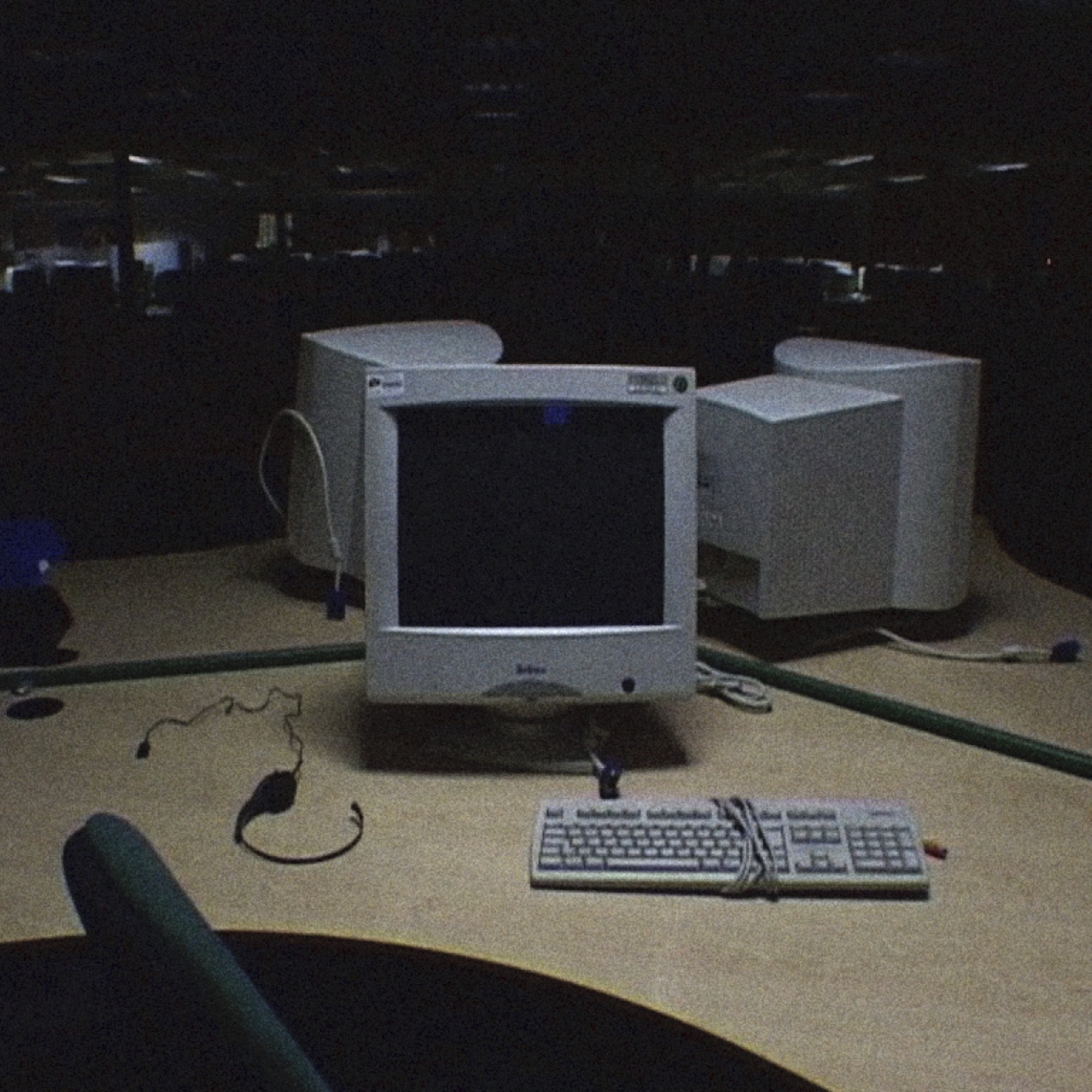 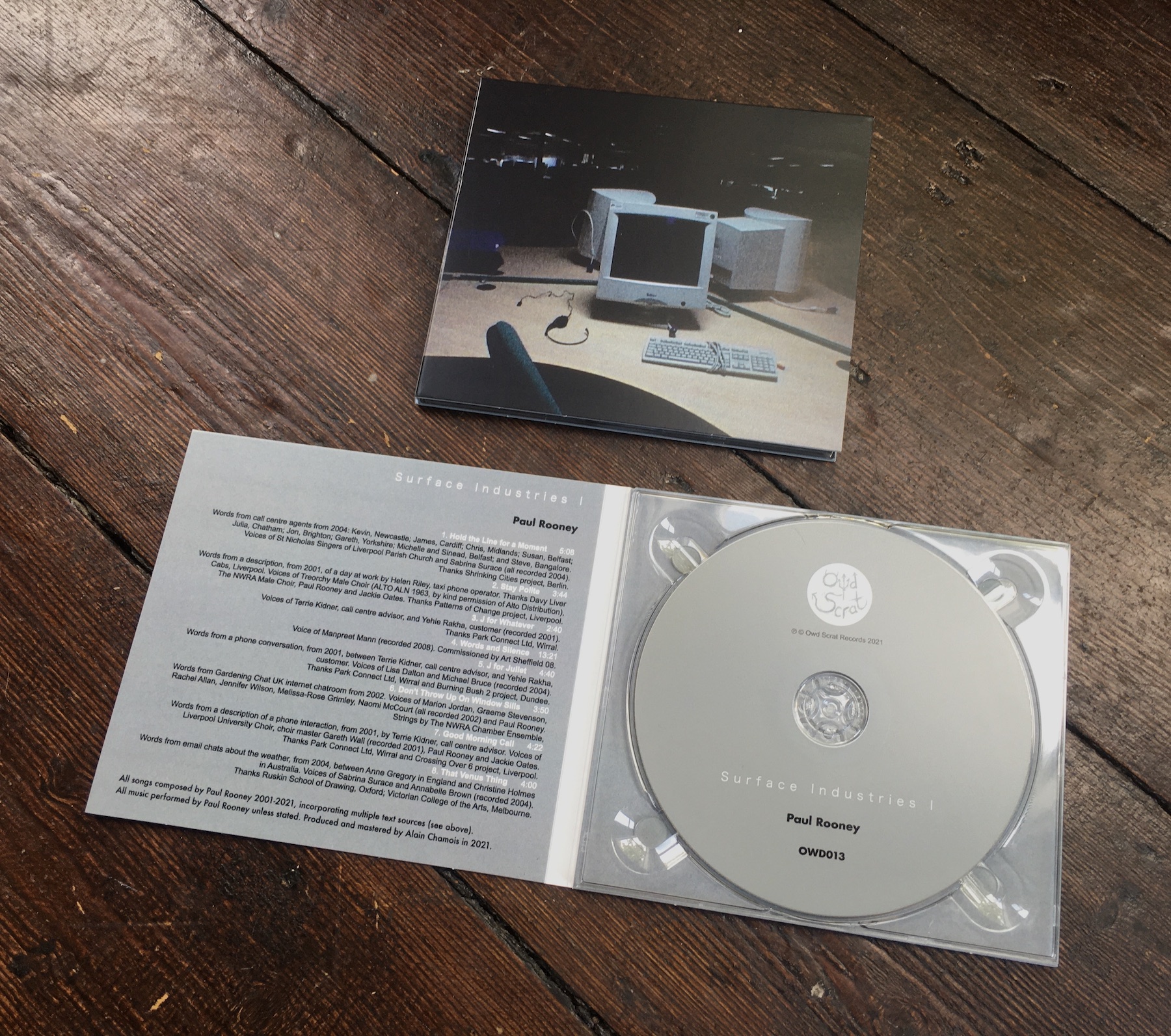 Rooney’s second solo album is a move away from the eclectic DIY post-punk of 2017’s ‘Futile Exorcise’ towards voice, piano and electronics led skewed ambient pop. As it’s title suggests, this new album’s tracks are themed around service industry jobs (it is the first of two albums on this theme), particularly the transient vocal interactions of everyday call centre work, as well as the humanity and humour that endures through it all. The lyrics of the pieces often use interviews or texts from the workers themselves, made during the early to mid 2000’s.

Stay Polite is a deeply emotive male voiced hymn to the abuse filled day of a female taxi company phone operator, featuring a beautifully fragile lead vocal by acclaimed folk singer Jackie Oates. On the album’s longform spoken word piece, Words and Silence, softly insistent modular synth tones accompany an Indian call centre worker leaving a message – of invented personas and time-as-commodity – on an answer service, creating an extended moment of mysterious confabulation for the eventual listener (us). As well as phone interactions there are two pieces about the text based interplay of email conversations and chat-rooms. The latter, Don’t Throw Up On Window Sills, being a kind of chamber opera about a gardening chat group celebrating the return of a missing cat, imbued with the melancholy of obsolescence (the chat-room fad itself is all but extinct). The album is a poignant, reflective encounter with everyday failures, everyday battles, and everyday resistances, pertinent to our precarious times.

“This next track is one of the three or four I would have voted for myself, it’s epic, it’s Mr. Rooney again, with Words and Silence… at number 9” Zaph Mann, In Memory of John Peel Show, Festive Fifty One (KFFP Radio, Portland and podcast). 31/12/2021.

“Extraordinary stuff, Hold the Line for a Moment by Paul Rooney… that was number 24” Zaph Mann, In Memory of John Peel Show, Festive Fifty One (KFFP Radio, Portland and podcast). 31/12/2021.

“That’s at number 34 in the Festive Fifty, that’s Paul Rooney and the wonderful Words and Silence… that’s my favourite track of the year.” Rocker (Dandelion Radio). Dec-Jan. 2021.

“…Dandelion favourite Paul Rooney. I know I’m not the only fan of the new album Surface Industries on Owd Scrat: well worth your attention, the entire thing.” Thomas Blatchford (Dandelion Radio). Nov. 2021.

“Curiosity was twigged by a Wire magazine review… I was expecting something far less accessible based on the review… surprisingly accessible and compelling.” Nate Champion (Thumped website and forums). 28/12/2021.

“These eight tracks have been created over a period of two decades, mostly using texts derived from call centre operatives. They occupy a space where folk music might have developed, up to that juncture when meaningful tradition and continuities of locality dissolved into the glacial wastes of cyberspace, global capitalism and the unsolicited sales pitch.” Julian Cowley (The Wire magazine). Oct. 2021.

“There you go, thirteen minutes and twenty one seconds of magnificence… Words and Silence by Paul Rooney…” Leo Gilbert (Dandelion Radio). Sept. 2021.

“A new release from Paul Rooney, that in itself is always a reason for celebration… beautiful album…” Pete Jackson (Dandelion Radio). Sept. 2021.

“It’s a great thing. Paul Rooney, always up to something good…” Michael Fenton (Fenny), On the Wire (Otwradio on Mixcloud and occasionally BBC Radio Lancashire). 18/9/2021.

“2017 saw his LP Futile Exorcise rank as my Album Of The Year. This follow-up might even be a bit better, if that’s possible. It is indeed completely unique and totally inimitable.” Gavin Hellyer (Bandcamp website). Aug. 2021.

“Yet again, there is another stunning album that’s been released by Paul Rooney.” Zaph Mann, In Memory of John Peel Show (KFFP Radio, Portland and podcast). 13/08/2021.